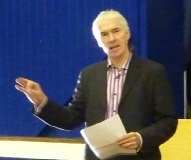 Martin Post reflected on his academy experiences so far

At our October 2011 Forums, governors were briefed by Justin Donovan, Director of Education and Early Intervention for HCC.

Martin Post, headmaster of Watford Grammar School for Boys, related his school’s experience of being an academy so far.

Gill Jones informed governors about Free Schools, from her experience as a governor of the Hatfield Community Free School.

This term is the first time that the Forums have been combined with the Local Authority’s Briefings. It is planned that this arrangement will be the pattern for the future, with one of the two Forums that take place each term being combined with a Briefing. Partly because of this and partly because of the interest in the topic on Academies, there was a very promising attendance at both the Forums.

On Saturday 15th October, Governors met at Westfield Community Technical College in Watford to hear two speakers.  The first was Martin Post, head teacher of Watford Grammar School for Boys, whose talk was entitled, ‘Being an Academy: Lessons of the First Year’. Martin was very positive about the step the school has taken, while remaining keen to continue to work in partnership with other schools and with the LA. Martin was followed by Gill Jones, well known to many Governors as the former head of School Standards and Effectiveness, (now being run by Gillian Cawley). Gill’s talk was called, ‘Free Schools – Opportunity, Distraction or Threat’. As well as giving an overview of the national programme, Gill updated the audience on the Free Schools that are in the planning stage for this area: The Harpenden Free School, Alban City School and Hatfield Community Primary School. Jill’s powerpoint slides are available on this website. Both talks were followed by lively question and answer sessions.

On the following Thursday evening (20th October), Justin Donovan, Director of Education and Early Intervention, filled the first hour with the usual Briefing. He covered 4 areas: The LA’s latest reorganisation; the recently released statistics on pupils’ test and exam results; an update on Academies in the county; and the progress of the Education Bill currently nearing the end of its time in Parliament before becoming an Act. Questions to Justin included: the English Baccalaureate; the effects of the separation of education and social care; LA services for schools if most schools in the authority become Academies; and monitoring the quality of private service providers. Justin’s powerpoint presentation is also available on this website. Justin was followed by Martin Post, who repeated his informative talk on becoming an Academy and answered a fresh range of questions.

The HASG Committee is very grateful to the speakers for generously giving their time, to Westfield for accommodating us again on a Saturday, and to all the Governors who attended and helped to make both sessions a satisfying mixture of information and debate. At this time of accelerating change for schools and for local authorities, it is not easy to keep up to date with what is happening both nationally and locally. Combining the Briefings with one of the Forums each term maximises Governors’ opportunity to be kept informed and to contribute to the ongoing discussions about how the LA and individual schools are responding to the national agenda. If you have attended before, please make sure you come again, and if you have not yet sampled what is on offer, please join us next term. In the meantime there is the Herts Annual Governors Conference to look forward to on Saturday 19th November, which includes the AGM of HASG. See you there!